Britt received her Master’s degree in Architecture from Boston Architectural College, where she also was the recipient of both Commendations and the Edwin. T. Steffian Centennial Thesis Award for her thesis “The Harbor Baths.” The project explored designing with water as an integral part of architectural expression, to facilitate experience of the constantly in-flux nature of the tides. Her studio work has also been exhibited both at the BAC and the Boston Society of Architects. Since graduating, Britt has become a recurring thesis critic at the BAC.

An expert in visualization, Britt is often one of the faces behind DSK’s renderings. She first became interested in the artistry of graphic design and representation during her undergraduate education at the Art Institute of Boston, where she received a Bachelor’s degree in Fine Arts.

In her spare time, you can find Britt snapping photos with her collection of analog cameras, cruising the local snowboard park, and passionately caring for her many houseplants. 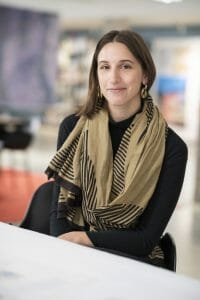