Mark is an Architect at DSK. He has a wide variety of project experience, including residential, public library, museum, educational, and healthcare assignments. Mark served as an editor of inter∙punct, Carnegie Mellon University’s totally student-run architectural journal.

A lot of Mark’s family members worked in the building and construction trades. He has wanted to be an architect as long as he can remember. He firmly believes architecture and design should strive always and everywhere for public engagement and has devoted his career to making that a reality. As he learns more about construction and real estate, he is increasingly interested in exploring alternative financial models and modes of practice, including architect-led design-build, architect-led development, and rent-to-own and cooperative housing.

Mark received his Bachelor of Architecture with Minors in Architectural History and Philosophy from Carnegie Mellon University. He spent a semester abroad at the University of Copenhagen studying urban design and existentialist philosophy (no joke!). He is a Boston native of Portuguese descent still fluent in his ancestral language. His interests outside of architecture include art, literature, film, foreign languages, linguistics, traveling, good food, craft beer, humor, history, hockey, tennis, and Winston Churchill. 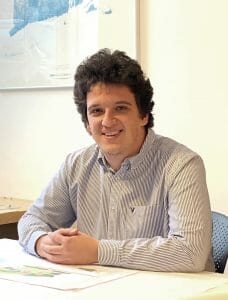